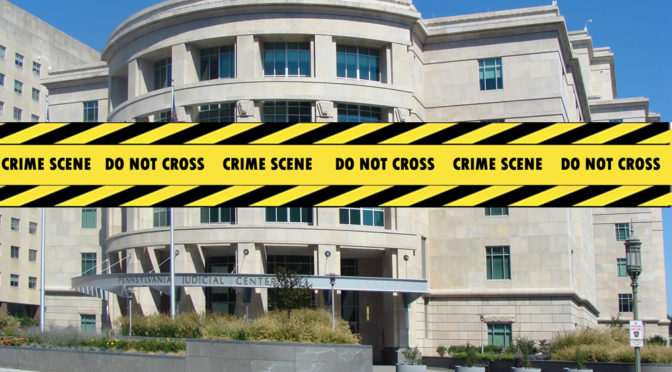 In an article on Philly.com on November 15, 2015, regarding the ongoing judicial calamity in the Pennsylvania Court System, ethics expert Geoffrey C. Hazard Jr., an emeritus professor at the University of Pennsylvania Law School, took aim at the Judicial Conduct Board’s  position that its proceedings are confidential. “It is a little paradoxical that a board constituted to create greater transparency and trust in the judiciary is itself quite untransparent,” he said. Pennsylvania citizens did not need an Ivy League law professor to state the obvious,  it has been evident to litigants for decades.

An element of this crisis that still has received no attention from the government,  is the damage this flawed and irresponsible legislation has done  to thousands of people.   Since the judicial disaster in Luzerne County,  there has not been one mention that maybe many of the thousands of dismissed judicial complaints were valid.    People have suffered loss of their homes, had to purchase custody of their children, and the ultimate injustice -false imprisonments.

This is reminiscent of a past response from  Septa, for requests for a railroad  crossing gate. They were told that a certain number of accidents had to occur before it would warrant any such investment. Just what is the lucky number and how is the government going to provide restitution, if at all?

In 1993, the Pennsylvania Constitution was amended with Article V Section 18, forming the Judicial Conduct Board of the Pennsylvania Supreme Court. The Board was established in response to a wave of corruption in the 1980’s.    The Judiciary’s answer was to self-police in secrecy.  Now we see how well that has worked out.

The authors of that amendment, must have realized they were creating a petry dish for  organized crime.  No interference from the public, the Legislature, the Executive Branch or law enforcement. This was their interpretation of judicial independence.   In retrospect, Pennsylvania got punked.  The whole thing reads like a deal that you can’t refuse from “The Godfather. “

The power to  add that amendment came in 1968, with the addition of Article V Section 10(c) of the state Constitution, which gave the Judicial Branch administrative autonomy.  They used that ambiguous legislation to create judicial immunity, self-recusal, broad judicial discretion (which is just a ticket for them to make their own laws) giving power to deny jury trials and then a secret self-discipline process. Put that all together and you have the perfect storm.    Do not forget about the unbridled campaign contributions from the lawyers to these judges, and the unregulated attorney hourly fee system.  What you get is cases that go on for years, often decades – to build up those fees in return for those contributions, and no where to turn for help.

These judges  felt they were so untouchable in their $150 million  castle they built in 2010,  that they had the insolence not to implement any of the recommendations of the Interbranch Commission that was formed in response to the Kids for Cash Scandal.   The Supreme Court  just decided that putting those two judges in prison would solve the problem – and they could  just maintain the status quo, and continue their racketeering as if nothing happened.

If it wasn’t for Attorney General Kathleen Kane- we would all still be feverishly filing, thinking one day we would eventually receive justice from these faux judges. But even with her release of the thousands of pornographic emails between members of the Judiciary, much of the public has stood silent while they  try to silence Kane with attempts to remove her from office.  This concerted effort has surfaced increasing evidence that the entire court system is tainted and unrecoverable.

One of the judges on the panel that found Kane in contempt for violating a protective order, should have recused himself.  Judge Richard Haaz, is the father of Sam Haaz, an Assistant District Attorney that works for DA Seth Williams.  He is even friends with him on Facebook.  The two prosecutors that instigated the charges against Kane,  Frank Fina and Mark Costanza, also work in DA Williams office, who has refused to terminate them, even after half their city council complained.  Now that leaves us thinking, why would the Philly DA keep those prosecutors employed – what do they have on him?

On top of that, Justice Michael Eakin sat on the panel that suspended Kane’s law license, after she announced he was one of the porn email senders.  He had his disciplinary case dismissed by the Judicial Conduct Board. Now  the Board’s Chief Counsel, Robert Graci, admitted concealing his conflict of interest in the review of Eakin after the local media exposed that Graci had worked on Eakin’s retention election campaign.  All of that leads to the suspicion that Graci, may have just gotten his job from  Justice Eakin, who’s disciplinary case has been resubmitted by Kane, with some new graphic emails.

It also recently made headlines, that one of the Conduct Board members, Police Chief Dooley,  was also in the chain of porn emails, and failed to recuse while he was also reviewing Justice Eakin.    That is notwithstanding about the fact that the Judicial Conduct Board is not even in compliance with the Pennsylvania Constitution, which states they  must have six non-judicial members.  Three of those supposed “citizen” members are  two retired judges and  a retired attorney- and of course we have the Police Chief- another judicial employee. I do not think that is what the PA Constitution had in mind.

Enough is enough. What more evidence does the Pennsylvania government need?  Justice McCaffery was forced to resign and former Justice Orie-Melvin is in prison. Another judge, Feudale seems to have been caught trying to sell grand jury information to the media. The entire Philadelphia Traffic court bench had to be fired.

This system  simply cannot be salvaged. These judges cannot be rehabilitated. Their brains are too indoctrinated into thinking they are royalty. Every appellate court judge needs to be removed.  Every common pleas judge needs to be put through the ringer, with all of their cases reviewed.   Every dismissed  judicial complaint from the last 23 years needs to be pulled out of the closet into the sunlight. The people need relief.

The days of appearing in costumes of black robes and sitting on thrones above our heads- need to be over. The entire archaic system, was inherited from the monarchy from which we separated in 1776, and has no place in America. It’s time to demolish this train wreck and start over, and  some of those black robes need to be  exchanged for orange jumpsuits.