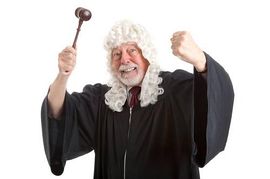 The former head of the Department of Justice Civil Rights division, Vanita Gupta,  sent out a bold letter (below) before her resignation in 2016. What many courts consider a “routine administrative matter” of forcing defendants to pre-pay a “bond” or “bail” before they’re allowed to schedule a court date, or incarcerate a person for nonpayment of fines or fees without first conducting an indigency determination and establishing that the failure to pay was willful,  is actually unconstitutional, Gupta wrote. This is especially applicable to family court and support  issues.

A Huffington Post article got it right, reporting that while Civil rights advocates praised the Justice Department for sending the letter.  they say there’s a much more powerful tool available if the feds really want to deter judicial crime: Federal prosecutors can hold judges accountable for their unlawful conduct by charging them with a federal crime. Section 242 of Title 18 of the U.S. code ― the so-called “color of law” statute ― is the same federal civil rights legislation that Justice Department prosecutors use against police officers and prison guards who use excessive force and make false arrests. The law applies to prosecutors and judges, too. But the feds don’t use it against them often.

Brandon Buskey of the American Civil Liberties Union wrote in The New York Times last year that using the law against judges shouldn’t seem like a radical idea. “Judges and prosecutors violate civil rights every day, in plain sight, and with seeming impunity,” he wrote. “To make them answer for these crimes, the federal government must continue to extend its reach beyond the streets and into the courtroom.”