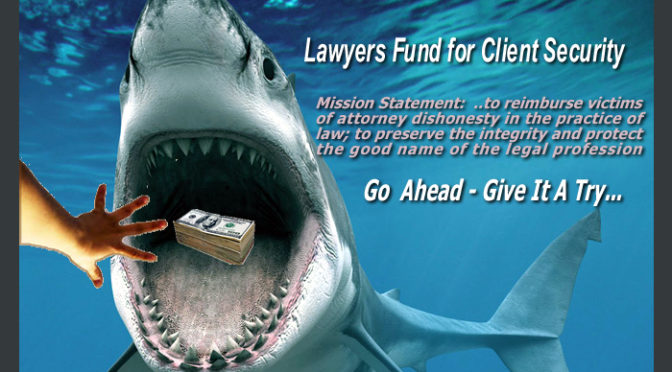 One of the lesser known provisions of the U.S. legal system is a “safety net” called Lawyers Fund for Client Security, which comes under the The National Client Protection Organization, Inc.   There are branches in almost every state in the country.   These funds are supposed to provide restitution for theft perpetrated by attorneys, but it would be very un- American if you didn’t have to jump hoops for any chance of recovery.

As with everything in our capitalist regime, experience has shown these funds to lean more towards another revenue generating machine for the Judiciary, with a duel purpose to allow lawyers to operate outside the law.  While the Judiciary consistently proclaims their “independence” from outside discipline is necessary for their integrity,   one has to wonder if that is working so well, why do they need such a fund?  It  appears to be  hard evidence of lawyers stealing tens of thousands of dollars and most of them never see the inside of a prison cell.

In the world of the Judicial Branch of our government, it is called “conversion;”  for the rest of us it is called grand larceny.  One attorney in Pennsylvania, according to their 2013-2014 annual report, had 64 claims against him, before the Pennsylvania Attorney Disciplinary Board decided to act.  As with the Judicial Conduct Board, another black hole of impunity, that will open for any litigant trying to escape the courts unscathed.

The United Nations “Set of Principles for the Protection and Promotion of Human Rights Through Action to Combat Impunity”  it  as: “Impunity arises from a failure by States to meet their obligations to investigate violations; to take appropriate measures in respect of the perpetrators, particularly in the area of justice, by ensuring that those suspected of criminal responsibility are prosecuted, tried and duly punished; to provide victims with effective remedies and to ensure that they receive reparation for the injuries suffered; to ensure the inalienable right to know the truth about violations; and to take other necessary steps to prevent a recurrence of violations.”

Investigations into complaints of the “conversion” of money entrusted to lawyers, through various functions such as estate or escrow management of retainers, are by their own rules, conducted in secrecy. As an example according to Pennsylvania Rules of Disciplinary Enforcement  Rule 521. Investigation and payment of claims. it states that the Supreme Court Disciplinary Board  “shall preserve the confidential nature of any information which is required to be kept confidential under these rules.”  While normal citizens are paraded in front of the media for theft, the people never know which lawyers are most likely to steal their money, until it is too late.

It is very difficult to get a claim approved.  Since 1982, only 800 attorney-actions resulted in payouts from the fund, even though in 2014 alone, Pennsylvania had over 4100 misconduct complaints. Only 84 of those resulted in disbarment or suspension.  Not only is the Disciplinary Board reluctant to find fault with their own, but in reviewing these claims, by lawyers themselves, it appears that they will not provide restitution for misconduct outside of acts regarding trust or escrow accounts. Although the Attorney Disciplinary Board in the State of Pennsylvania had over 4000 complaints during 2014, the Pennsylvania Lawyer’s Client Security Fund claims that only 394 claims were received.  This is likely because they do not advertise the existence of the fund. They paid out on less than half of those claims.

The money they receive from lawyers gradually making repayments for their theft, goes into these funds.  This “nonprofit” organization, who  are supposed to oversee repayment, shows on their IRS 990 form that Pennsylvania generated  $614, 230 in investment income and showed over $10,000,000 in assets, from their fund in 2014.  The Board spent $26,000 for traveI and close to $50,000 for bank fees.

The annual report in Pennsylvania does not report how much was actually stolen and only paid out approximately $3,000, 000 in restitution. Approximately 77% of restitutions were provided to people who had estate and trust accounts, and were most likely already wealthy, for a total of $1,814,094. Less than 10% of the awarded claims were for non-performance and fraud, which totaled approximately  $250,000.  The remainder went to claims for theft of lawsuit awards never reaching the parties.  If your lawyer over-billed you or intentionally complicated and prolonged your case, caused your home to go into foreclosure or your business to close down,  they will most likely not approve your claim.

In Pennsylvania it states under Rule 514.   Reimbursable losses.

(a)  General rule. For the purposes of this subchapter, reimbursable losses consist of those losses of money, property or other things of value which meet all of the following requirements:

(1)  The loss was caused by the Dishonest Conduct of a Covered Attorney when acting:

(ii)   in a fiduciary capacity customary to the practice of law, such as administrator, executor, trustee of an express trust, guardian or conservator;

(iii)   as an escrow agent or other fiduciary, having been designated as such by a client in the matter in which the loss arose or having been so selected as a result of a client-attorney relationship

One advantage these funds do provide, is in their annual reports, some states actually publish a list of the miscreant attorneys, that may be found at the links above.  It has only been since 2007, that Pennsylvania has published these attorneys names in their reports which can be found  here.  In researching the list of names in the 2013-2014 report, only the most egregious of cases could be found under federal criminal dockets at pacer.gov, whereby there were multiple victims before the Disciplinary Board took actions.  In all fairness, it must be taken into account that law firms for too long in our rogue legal system, have been allowed to impose profit quotas on attorneys, creating pressure to rip-off clients to retain their employment. You may be able to find reports on your state through here.

The public is not allowed to participate in any disciplinary actions against lawyers or judges- they are completely self-regulatory. Not even the Governor or Congress has been allowed to intervene since the late 1960’s when the lawyers managed to change the State Constitutions, and then in  1996, the U.S. Constitution to reinforce immunity for the legal profession.

In many cases, the lawyers merely have to pay back a portion of what they “converted”- and may take years to do so.  If you robbed a bank and got caught, it is doubtful that by giving the money back, you would avoid prosecution.  Some lawyers are even allowed to continue to practice law.  In theory, restitution is to be provided to the victims, however, they do not necessarily recover all of their money-the fund has a general cap of $100,000 per victim.  And the attorney maybe reinstated to the practice of law, after they pay the fund back only for the amount that the fund paid out to the victim, whether or not it was the full amount that they stole.

The ABA put out this directory in 2010, which may or may not allow you to find such a fund in your state. Go ahead- try  your luck. I tried it.. I still have my hand- but that’s about it.