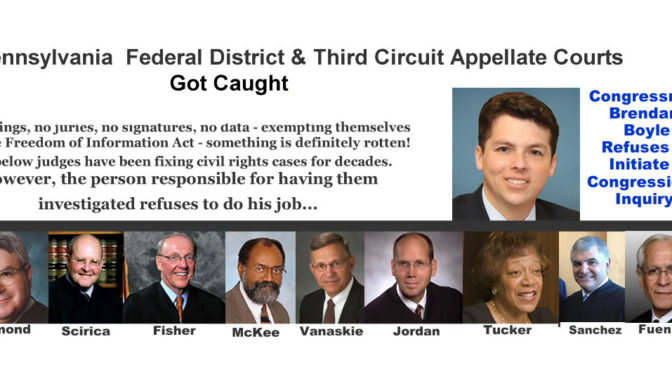 Even for those that have become resigned to accepting the status quo,  the series of events in the following brings a whole new perspective to judicial corruption.   While such abuse of power is now expected, the state of Pennsylvania has very unique influence all the way to the U.S. Supreme Court.   If none of the following is true, the above pictured federal judges surely would have offered proof to refute it, to “preserve confidence” in the judiciary.  Thus far they have declined to do so.

It is common knowledge that those who come to court without a lawyer, are usually treated with condescension.  Judges resent such people because they have no fear of losing their law licenses, and can openly criticize the court system. In this case, what started as a pro se (self-represented) employment discrimination law suit in 2013, became a quagmire of the uncovering of a judicial cabal, that has seditiously been by-passing the most critical court protocols.

Although the underlying employment case is now just secondary,  in a nutshell, the Defendant Thomas Jefferson University,  was accused of concealing  evidence. The Plaintiff had applied for 50 other jobs during six years of employment with them, but was laid off after made to train someone 30 years younger. The Defendants then claimed the seven most recent jobs which were still timely enough to dispute in the case, had all allegedly been cancelled and no one hired. This was later discovered to be untrue of at least two positions.  On top of that 80% of the employees that filled those other 43 positions were ten or more years younger than the plaintiff.  It was a prima facie case.

The complicity of the judge was obvious, when District Court Judge Paul Diamond dismissed it, obstructing a jury trial and ignoring the blaring evidence. It was quite obvious that Diamond was assisting the Defendant, who is one of the largest corporations and lobbying entities in Pennsylvania. Judge Anthony Scirica was the only appellate judge to sign the final Opinion dismissing the appeal of Diamond’s order,  pretentiously using case law he had written himself apparently for just such occasions. But it was his denial of a request for signatures that was the red flag.

In appealing a lower Federal District Court decision, the first step is a review by an Appellate panel of only three judges.  However,  if their opinions are challenged by a party, the appeal must be presented to the full (en banc) appellate court panel. This usually consists of about a dozen other judges.  When this pro se Plaintiff questioned whether a panel had actually submitted a challenge for the en banc review,  they asked for signatures of all 12 judges.  The request was denied by  Scirica, who then  had a clerk send  a letter refusing  to respond to a second request, which was for the law allowing him to  refuse to provide confirmation of full review.

This is where it gets really twisted.  Sirica, who was a Montgomery County Common Pleas judge and former State Representative,  is also the Chairman of the Judicial Disciplinary Committee of the Judicial Conference of the U.S. Supreme Court in Washington DC. The  Disciplinary Council at the Third Circuit level was Chaired by former Chief Justice Theodore McKee, who is also on the Disciplinary Committee with Scirica (and who also had the power to assign judges to appeal panels in the Third Circuit).

After a futile disciplinary complaint against Judge Diamond appeared to similarly have never been sent to the full eleven member, Third Circuit Disciplinary Council, a complaint against McKee was sent to Chief Justice John Roberts of SCOTUS, as Chair of the Judicial Conference, to bypass McKee and Scirica.  Yes…its that convoluted.  The Plaintiff received a letter almost six months later, from Washington DC Administration of Courts stating they would not address any further disciplinary complaints and to go hire a lawyer. The entire system is just a three-ring circus.

Of course no lawyer was hired, because no one wanted to lose their law license by challenging this cabal. But the Plaintiff filed a pro se law suit in 2017 against Scirica  and six other judges involved at various levels- Diamond, Fisher, Jordan, Fuentes, McKee and Vanaskie for fraud.  Not surprisingly it got assigned amongst the cabal, and the claim was dismissed, this time citing  judicial immunity.   It is now on appeal, and you would think  they are running out of cabal members to assign, as most are now defendants in the  lawsuit.

But that did not stop the assignment of the defendant Judge Diamond on the Plaintiff’s other unrelated law suit. Diamond outrageously refused to recuse, and  dismissed it with a ridiculous retaliatory diatribe. It is now on appeal. Petrese Tucker as President Judge of the District Court, would not answer the letter of inquiry sent to her for confirmation that the judges are being randomly assigned, according to the rules.

In four years of litigation, this self-represented citizen had not been allowed in a court room and has never seen any of the above judges. They have taken it upon themselves not only to eliminate signature requirements, but of having to face the public by doing away with courtroom hearings and jury trials at their “discretion.” Obviously  it makes it simple to rig outcomes when only a few people are actually seeing the case, and  essentially they are forging names if they falsely claim that all the other  judges participated in the decisions.

These cabal members have strong conflicts of interest.  Most got appointed because of one specific politician-U.S. Senator Arlen Specter and his campaign Treasurer and close friend for decades – Defendant Judge Paul Diamond.. That is of course how Diamond went from being an assistant DA to a Federal Judge. Most, if not all, of the other Judge Defendants, have Diamond in part, to thank for their jobs, so forget about winning an appeal against him, especially if you are pro se.

Specter is the poster child for term limits in Congress.  He put about twenty  federal  judges on the bench, as the second longest running Senator in the history of the country for over 30 years.   It is no suprise that his son’s law firm, Kline Specter LLC, is now one of the wealthiest in the state.  The question is, do they disclose this relationship in their litigation?  It is an issue that has not been entirely gone unnoticed, which can be evidenced here in this article.  of his representation of convicted mobster Louis Denaples.

Pennsylvania even has the federal rules committee tied up.  Congressman Tom Marino- is a  former Assistant U.S. Attorney that had to resign because  Denaples accidentally used him as a reference for a casino license. Marino then went to work for Denaples for $250,000 year- after which he was funded to run for Congress, and immediately got himself assigned to the House Judiciary Committee.

Federal Judge D. Mike Fisher, is a former State Representative, Senator and Attorney General of Pennsylvania and he ran for Governor in 2002.  His campaign finance history shows tens of thousands in campaign contributions from DeNaples and also from Defendant Thomas Jefferson University and their law firm Klehr Harrison, Harvey and  Branzburg, LLC. It appears Fisher’s consolation prize after losing against Fast Eddy Rendell in a 2002 run for Governor, was the federal judgeship from Senator Specter. But none of this appeared to be basis for recusal.

The ties do not end there.  SCOTUS Justice Samuel Alito is from the Third Circuit, and Judge Sirica’s spoke at his strongly opposed nomination. It was alleged that he was “too soft” on organized crime, when 22 accused mobsters were suspiciously aquitted, that Alito was prosecuting as the U.S. Attorney of New Jersey.  He also was accused of actively undermining civil rights laws. So anyone from Pennsylvania that applies for certiorari, i.e. tries to get heard before the Supreme Court, has to go through Alito, as the Third Circuit SCOTUS gatekeeper.

Requests for statistics on civil rights case outcomes in the Pennsylvania Federal courts have thus far been denied.  The Plaintiff has been unable to get another job because to discourage employment discrimination allegations, the courts deliberately refuse to seal such cases. Obviously employers now google applicants names and would be hesitant to hire someone suing their previous employers.

The protection from this level of corruption is supposed to be Congress- they have the duty and the power to initiate an investigative committee into the judiciary. But Congressman Brendan Boyle- with a brother Kevin in the state legislature- just refuses to do anything. They are just too heavily funded by the legal industry, which is in turn is dependent upon judges to allow them to pad their bills.

Judge Scirica has been doing the speech circuit pontificating about how they must not allow the legislature to impose an Office of Inspecter General (OIG) over the Judiciary,  like the Legislature has been attempting to do for 20 years. He claims with pretzel logic, that it is a threat to their independence- but somehow  campaign contributions to judicial elections have no influence on impartiality.

Having these rogue, unchecked miscreants serve for a life time is a complete disaster.  Democracy and due process is completely dead in the Keystone State. No hearings. No civil jury trials. This path of organized crime from Harrisburg straight to SCOTUS is being covered up by Congressman Boyle among others that depend on their patronage.  But what do you expect from the state that gave us Porngate, Kids for Cash, the Sandusky coverup and has had more state Supreme Court justices removed than anywhere else in  the nation?